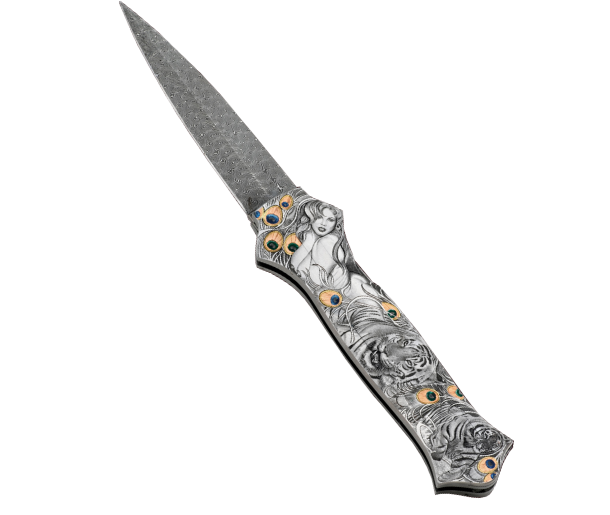 The field of handcrafted and collector knives is quite extensive for what concerns both individual knife makers and specialised engravers. Though not a priority sector for the Gardone team, they have made numerous works on interesting pieces with high intrinsic quality. I have provided an overview of the most significant works, pointing out that even the materials used and mounted directly by the knife maker sometimes act as a styling decoration. Again in this case it will be up to the good taste of engraver to study and make a composition that properly matches the line and morphological and construction characteristics of the tool.

The type of gun

We saw the current relationships between the type of gun and subject of the engraving are no longer so restricted, in the same way that there is not always a direct relationship between mutual costs. According to tradition, the subjects refer in general to the game that can be hunted with the specific gun. So, for example, in a small-bore basculating shotgun we might find small birds, rabbits, small predators and so on, while a large-bore double rifle will be engraved with African animals, tigers and large bears. English scrolls and ornamental patterns are more universal and look good on all types of guns, just like gold inlays and piercing.

This chisel is preferred on powerful ball guns to emphasise the "deep" force intrinsic to the gun and the engraving. Then, however, everything can always be mixed and a lot depends on the tastes of the customer and the specific requests. The following pages illustrate various engraving styles based on the type of gun, including details that must be inserted stylistically in the overall design. In turning/sliding bolt-action rifles, engravings are made on the plate under the clip and sometimes on the bolt and frame. Even the ornamental patterns will be selected based on the dimensions of the gun, its degree of finish and main use.